Aging Infrastructure Can Hit People Where They Live

In addition to aging infrastructure on the public side, the water and sewer lines connecting private homes to municipal mains are also aging. And a line break can pose a significant unexpected expense and inconvenience.

Outlook for the next 20 years is troublesome for homeowners 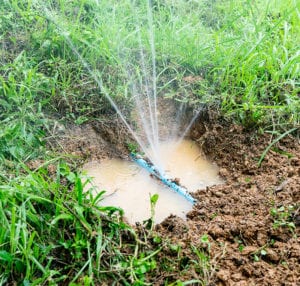 In an effort to understand more about the lifespan of water infrastructure, Dr. Juneseok Lee conducted research regarding water line failures and how pipe materials affect survival rates. In the study, Dr. Lee used nearly ten years of historical water line failure data from HomeServe, a home repair service plan provider*. In servicing over 1 million active water line service contracts and performing tens of thousands of repairs per year, HomeServe has amassed a significant body of data about the age, pipe material and lifespan of water service lines throughout the country.

Ten years’ worth of data on aging infrastructure illustrate that a significant percentage of housing stock is poised for potential service line failure. In this study, galvanized steel was the mostly widely encountered material in homes built in the 1950s and 1960s, and was still widely seen (second only to copper) in the 1970s. With galvanized and copper pipes demonstrating peak failure rates at between 50 and 60 years of age, the failure rates for these older homes would peak between 2005 and 2025.

Newer homes, built with modern materials, are not expected to fare much better. The study revealed that poly, copper and PVC were the most widely encountered material in homes built in the 1980s, 1990s and 2000s, with peak failure rates for these newer materials occurring between 30 and 40 years of age. That means expected failure rates for these newer homes will peak between 2015 and 2035.

For many residents, a water service line failure can present a tremendous financial hardship, putting pressure on already limited finances that are being juggled between housing, food and transportation costs. Replacing a water or sewer line could cost thousands, but one in three homeowners don’t have even $500 set aside for an emergency home repair, according to Biannual State of the Home Survey.  As cities struggle to make badly needed upgrades to their public water infrastructure, there needs to be a plan to include investment in private-side infrastructure improvements.

Collaborating to address private infrastructure – benefits to consumers and utilities

The research paper recommends water systems and municipalities educate their customers about their responsibilities with regard to service lines, providing customers with information that presents their options when faced with a service line failure. In addition, water utilities and municipalities should consider programs they can offer as a solution to help customers manage the cost and inconvenience of a failure when it occurs.

According to Dr. Lee, “Adopting these kinds of proactive approaches will minimize water loss by improving leak response times, thus ultimately reducing the cost to both customers and water utility operations. Adopting such strategies may well produce a ‘halo effect’ in that the ensuing customer satisfaction could build good will and help the country as a whole to navigate the challenging times ahead for infrastructure.”

This public-private partnership requires no investment of municipal dollars and little in the way of municipal management. Collaborating with this program enables municipalities to educate and protect homeowners without the extensive logistical and administrative challenges that can distract from their core missions. The program also provides non-tax revenue to fund important municipal initiatives.

Contact us to learn more about how the program can benefit your community.

* independent research, data requested by researcher and provided free of charge by HomeServe